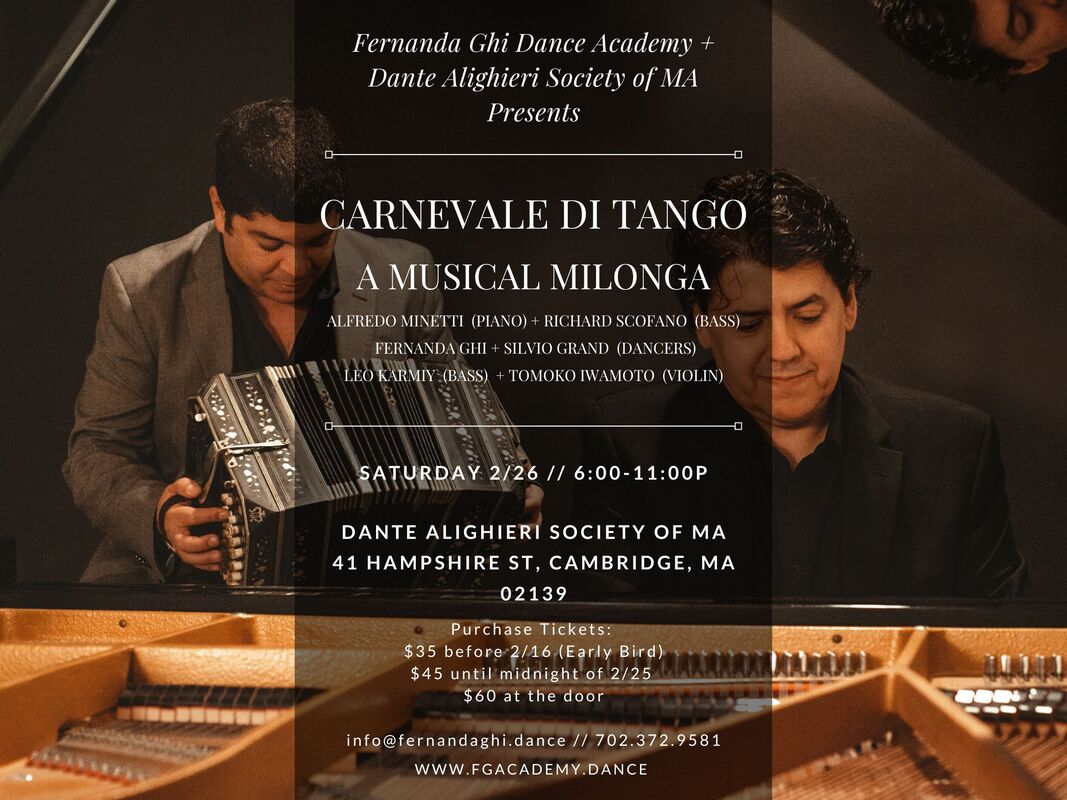 Please join us for a special evening of dance and live music. Alfredo Minetti (Piano) + Richard Scofano (Bandoneon) are a celebrated dou known for traditional and contemporary tango music they will be joined by Leo Karmiy (bass) + Tomoko Iwamoto (violin). You won't want to miss the dance performance Fernanda Ghi + Silvio Grand at this one time event!

​Proof of Full Covid Vaccination required at door. We will adhere to any other covid protocols that is required by the city of Cambridge at the time of the event.
PURCHASE TICKETS
Duo Scofano-Minetti

The Duo Scofano-Minetti (bandoneón/piano) walks the fine line between the classical, the folk, and the popular, presenting a stunning repertory of South American music. Their new compositions are rendered with astonishing power and beauty. The duo released their first CD (Estaciones) in October of 2016 and is currently working on their second. Their musical identity results from the merging of two distinct personalities. Scofano’s roots are in Corrientes, Argentina, birthplace of the chamamé, but he is influenced by classical and Brazilian music. Minetti was born in Uruguay, lived in Argentina, and grew up in Brazil, absorbing rich musical traditions that travel seamlessly from the popular to the classical. 6Well beyond the profound lyricism and rhythmic diversity of these traditions, it is the intensity of their performances and interpretations, their extraordinary level of musicianship and artistry, and the originality of their compositions that makes the duo so unique. They have been touring extensively since 2014.

​
Richard Scofano
Scofano was born in Paso de los Libres, Argentina and is the descendant of three generations of bandoneonists. A virtuoso of his instrument, he is also an accomplished composer and creator of the New Chamamé. He began his studies at age five with his renowned father Ricardo Scofano. At fifteen he graduated as master of music and by eighteen he was the first bandoneonist of the Folkloric Orchestra of Corrientes. Richard always nurtured interest for the music of Paraguay and Brazil and is passionate about the study of the European classical traditions. In 2015 Scofano wrote the score for This is Tango Now’s production of Carmen de Buenos Aires, a 90-minute work inspired in the work of Bizet. In 2016 he premiered his Concerto for Bandoneón and Orchestra, Iberá, with the Oistrakh Symphony Orchestra of Chicago and toured Brazil and Argentina on July/August of 2017 playing the same concerto with different orchestras. The year of 2016 also marked the release of his CD ‘Estaciones’ with his original compositions, interpreted by his duo with pianist Alfredo Minetti. In this recording Scofano debuted his original contribution to his native genre, the New Chamamé. In 2020 he was commissioned by the River Oaks Chamber Orchestra (ROCO) and wrote a symphonic poem entitled La Tierra Sin Mal (for bandoneon and orchestra), inspired on a Guarani legend, which he premiered with ROCO, on September of that same year. This year he will be the musical director and bandoneonist of an upcoming production of Astor Piazzolla’s ‘María de Buenos Aires’ in four Brazilian cities.

​
Alfredo Minetti
A native of Uruguay, Minetti moved with his family to Argentina and eventually to Brazil. He studied classical piano in Rio de Janeiro and developed an interest for the social and human sciences, earning a PhD in Cultural Anthropology from Indiana University. He created Minetti Productions, a performing arts company and the Zero Hour Tango Festival. In 2010, Minetti partnered with dancers Fernanda Ghi and Guillermo Merlo and they established the creative group This is Tango Now as a means to present tango under their philosophy and aesthetics. They produced the show Identidad and the tango/flamenco adaptation of Bizet’s Carmen – Carmen de Buenos Aires. In 2015 he formed a duo with bandoneonist and composer Richard Scofano and the duo released their first CD ‘Estaciones’ in the following year. An accomplished pianist, Minetti has performed in concerts, festivals and tours in Brazil, Argentina, Europe, China, Canada, and the US. He is currently working on a book on musical interpretation.